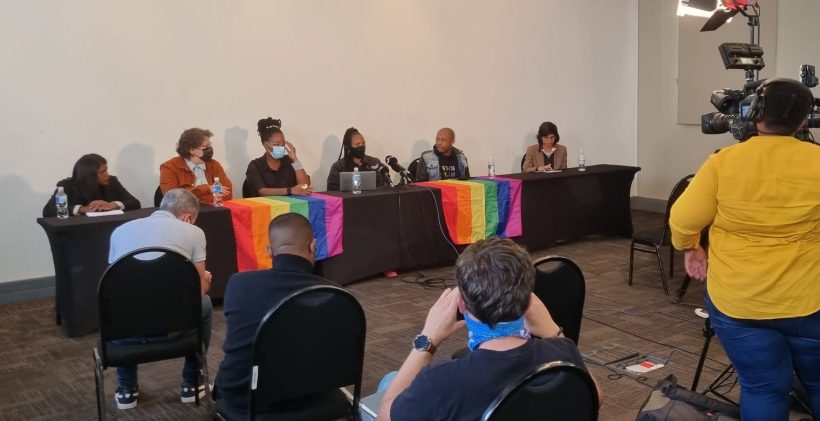 The LGBTIQ+ Community Comes Together To Say “Enough Is Enough”

Iranti joined representatives of civil society stakeholders in Gauteng on Wednesday to host a press conference highlighting the brutal Hate Crimes witnessed across the country in recent weeks.

Iranti, Out LGBT, GALA, FEW, and The Other Foundation met media at Constitutional Hill to call on the government and police to take serious action against the brutal targeted attacks on the LGBTIQ community.

Reading from the joint statement put together by the organisations, Virginia Magwaza of the Other Foundation said: “We have been here before. Since the dawn of democracy, LGBTIQ+ South Africans have continued to be brutalised.”

At least six people are believed to have been victims of suspected hate crimes that have been reported in the news since February. Their names, ages and causes of death were read out at the press conference.

Media and communications specialist Rumana Akoob of Iranti said that the reports of violence was made up of only known cases and that there were likely many more unknown violations.

“Iranti calls on the government, the police and the NPA to take violence against LGBTIQ+ people seriously, and to take urgent action because people are being brutalized and killed,” they said.

Roché Kester of Out LGBT called on the government to speak out against hate crimes.

Also speaking at the press briefing was Thami Kotlolo from the Thami Dish Foundation who said the government, police and the private sector needed to be held to account.

The statement noted that the South African Constitution did not just come with rights but also responsibilities, including leading by example.

“Our great continent is still plagued by LGBTIQ+ hate that has roots in its colonial past; a twisted heritage that we simply refuse to acknowledge or shake off and have misguidedly embraced as African.”

You can find the full statement here.