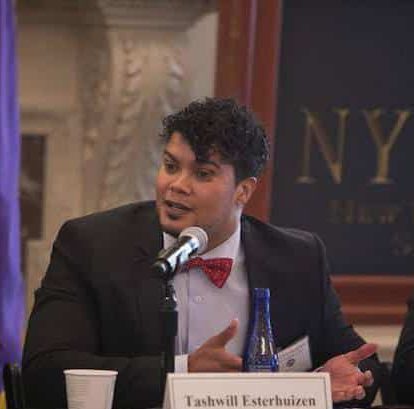 From legal to lived realities: Tackling change for LGBTI persons

Iranti board chairperson Tashwill Esterhuizen knows what it means to fight for LGBTI rights in a courtroom. And he knows the value of advocacy to ensure those rights are translated into a lived reality on the ground.

Esterhuizen, who was born on the Cape Flats, moved to Johannesburg from Cape Town less than a decade ago to work in the human rights sector focusing on socio economic rights at Socio Economic Rights Institute (SERI).

“I was working in housing and mainly focusing on evictions, defending indigent people who were being evicted within the inner city,” he recalls.

“I didn’t feel it was a job for me because I was doing the work that I love for my own community.

“I’m an openly gay black man. So that’s why I wastrying to really to focus my work,” he added. “I call myself an activist lawyer, and then that is to be to really be guided by the needs of the community, the LGBTI community,” says Esterhuizen.

His work has taken him throughout southern Africa including working with Botswana activists challenging first the registration of LEGABIBO, then changing identity markers for trans gender persons and then the challenging the criminalisation of consensual same-sex sexual acts in the country.

While these cases were all part of a long-term strategy for the activists, Esterhuizen says they taught him the importance of developing strategies together with those affected to promote social change.

“It was an incremental step towards this big – decrim – case that we’ve worked on for many years. I mean, not the case itself, but I mean, the strategy has been developed over many years. It was an important moment for the advance of human rights of every human being regardless of your sexual orientation or gender identity and this is reason why I find the case particularly important, especially for the African continent,” he notes.

“Some African governments make the argument that because LGBTI rights are not explicitly mentioned in their nationalConstitution, LGBTI persons are not provided huma rights protections. That’s absurd. There are many groups that are not explicitly mentioned in the Constitution. That doesn’t mean that people do not have access to rights, such as the right to equality, dignity, freedom of expression etc. The rights in our national constitutions applies to every human being by the mere fact that you are human,” says Esterhuizen

He paid tribute to the activists who laid the groundwork for change: “When litigation happens, people always focus on the legal aspect of it because we only see the legal victory.

“But the real people who support the process that led to the change are the activists themselves in Botswana.  The activists were visible. They spoke out. They engaged with the government. So they were there, they were really pushing for this reform. So they also contributed to an enabling environment where the courts felt comfortable to decriminalize gay sex in this country,” Esterhuizen adds.

He describes the June 11 anniversary of the decrim judgement as an “emotional experience”.

Reflecting on increasing intolerance and violence again the LGBTI community across the continent, Esterhuizen notes that litigation is often the easy part of the process: “It’s easy to go to court and win a case. But, it’s not easy to change hearts and minds. For me, this is the real challenge.”

He believes the LGBTI community needs to identify ways on how to address the root causes that lead to discrimination and stigma and the misconception that providing LGBTI rights was against African values and traditions and public morality, citing the 2018 decision by the AU Executive Council to withdraw the Council of African Lesbians’ (CAL) observer status based on the need to consider “African values”.

Esterhuizen notes the trauma of waking up to new violations against LGBTI people in the country while adding that all South Africans are affected by such violence: “So we, as a society, have to do some soul searching as to why we are so violent and have so much hatred and anger towards a community who are dreaming, like every South African, to live a life of dignity.”

While South Africa has good human rights policies, Esterhuizen says government needs to do more to ensure that the country’s laws started working for the people most affected.

“We need to consider how we can contribute to meaningful social change without resorting to more criminal laws because we have no shortage of those in Africa. I think that if we (Iranti board) can find a way to address such social issues in a meaningful way then I would be very happy,” Esterhuizen adds.