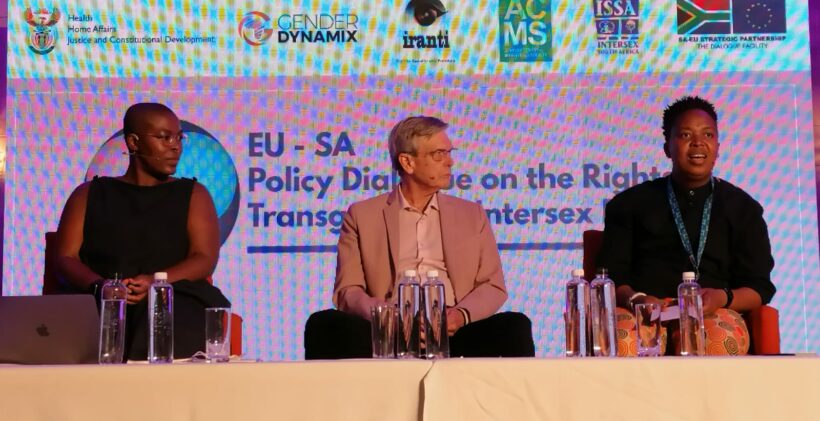 South African legislation makes invisible Intersex children and their access to rights which is further delegitimised with Intersex Genital Mutilation (IGM), participants at the SA-EU Dialogue on the rights of Intersex Persons heard.

Moderator Nthabiseng Mokoena and panellists Patrick Bracher from Norton Rose Fulbright Attorneys, Busisiwe Deyi from the Commission for Gender Equality and Tshegofatso Phala from the Equal Education Law Centre explored perspectives on Intersex rights in South Africa and how it pertains to children.

Earlier, Intersex South Africa (ISSA) executive and activist Mokoena said there was limited data on what doctors are doing to Intersex children, how many surgeries have already been done, or how many children are actually affected.

“It’s hard to make these conversations effective when we have these challenges ahead of us. It’s very easy to erase and disregard the lived experiences of Intersex experiences in favour of medical authority,” they said.

Mokoena said Intersex Gender Mutilation (IGM) was not the only form of bodily violence that Intersex people faced. Those violations included sterilisation and other surgeries.

Exploring why IGM is such an invasion and how it violates the rights of the child, Bracher said medical treatment by law is an assault on the bodily integrity of persons.

“There are only two ways of justifying assault: consent which is limited, and the other necessity. Consent is dealt with inadequately in the Children’s Act,” Bracher said.

“If you give consent, it has to be voluntary, explicit and informed and there is nothing explicit in the Children’s Act.”

Mokoena adds that agency and autonomy are imperative and must be conserved for children, giving them the agency to access consent for medical intervention when they are able to.

“There exists a network of legislation that invisibilises Intersex people,” Mokoena explained. “From our identity management legislation, Intersex people don’t exist in our society. You must exist within the binary — be either male or female.”

“IGM is not about intervention at the medical level, it is a citizenship issue about the right to exist within a citizenry and the right to claim access and have consent,” Mokoena said.

Phala proposed that there was space within the current legislative framework and constitution to push against IGM, at all levels from infancy to previous violations in adults.

Adding to this, Phala said there were structures in place for citizens and Intersex persons to hold medical practitioners and others accountable for violations relating to IGM.

“Laws don’t fall from the sky, they are made by people,” Phala said.

“It is through legal activism and those in the legal fraternity to build the power of people through the law. It is through litigating. We need to start agitating, challenging the law, and we need to agitate for change.”