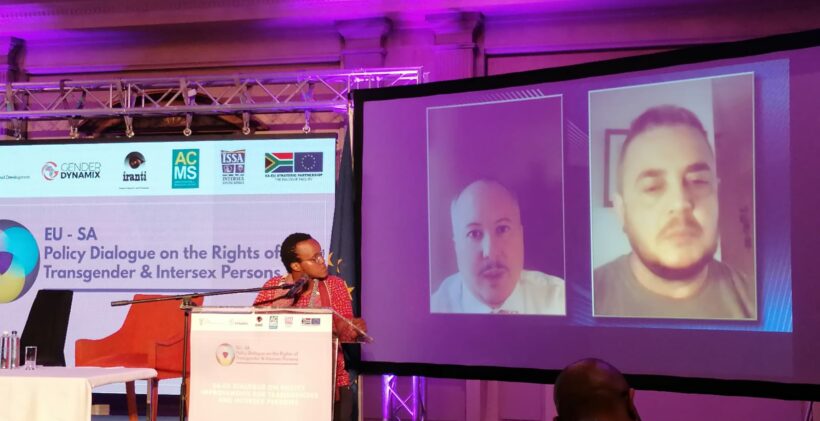 #EndIGM to protect rights of Intersex children … and adults

Working towards policy reform to remove IGM practices would support not only Intersex children from harm but also protect Intersex adults.

This was a key message during a panel discussion moderated by activist Joshua Sehoole, who joined panellists Mauro Cabral Grinspan from GATE and Dan Christian Ghattas from Oll Europe, to reflect on the Global perspectives on Intersex Rights Protections.

“We have seen some success in Europe in the past years, thanks to regional mechanisms. (It is) not that it is easy but we have found ways to use them beneficially,” said Ghattas.

According to Ghattas, four countries have banned IGM to varying extents, while a few have added secondary sex characteristic descriptors into law which also offer a form of legal protection for Intersex persons.

Contrary to what is happening in Europe, Central America is still lacking significant protection for Intersex persons from IGM and other harmful medical practices shared Grinspan.

“We had two hearings several years ago and a lobby at Parliament waiting to be addressed sometime next year, but on the entire continent we have on the one side which is quite active and visible, however, Intersex people are lacking the protections we find in Europe,” he explained.

The issue of IGM in Central America and Europe seems to be facing another battle, caused by a surge in anti-gender movements on the rise.

“We are seeing Intersex people coming from anti-gender movements against trans people and the objectification of intersex people as some unnatural abomination which is leading to the re-pathologising of Intersex people,” he explained.

Anti-science rhetoric has also taken the fore, as both Grinspan and Ghattas pointed out.

“People have very strange ideas about sex characteristics, and this puts activists working in vulnerable conditions under even more pressure, against anti-science ideas and people advocating for the re-pathologising Intersex persons.”

Both Ghattas and Grinspin believe that policy reform needs to not only remove IGM practices globally but include Intersex adults.

“When governments or policy makers imagine legislation to protect Intersex people, they want to protect the integrity of that baby to not be mutilated but they tend to forget about Intersex adults that have been born and mutilated. They are Intersex too and they have rights,” Grinspan said.

In Argentina, the policies Grinspan and his colleagues are working towards includes both Intersex persons who are yet to be born and those who have undergone IGM.

Grinspan highlights that Intersex people should have unfettered access to their medical records, an issue that many Intersex persons may face due to anecdotal mismanagement of legal records or alleged efforts to hide medical records of IGM by medical practitioners.

We need to put an end to Intersex mutilation today,” said Ghattas.