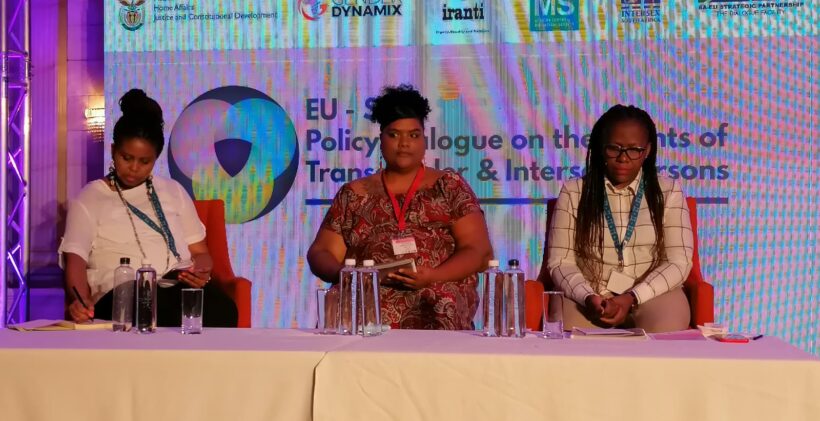 Intersex people’s rights and well-being, and the urgent need to prohibit medically unnecessary, non-consensual, surgeries and related medical interventions, came under the spotlight at the second day of the SA-EU Dialogue in Pretoria on November 5, 2021.

Intersex genital mutilation (IGM) is a major human rights violation that many Intersex people in South Africa, and around the world, have experienced. Infants are forced to undergo genital surgery to “normalise” their genitalia so that there is an appearance of “male” or “female”.

Yet, as Nthabiseng Mokoena emphasized earlier in the day, “IGM is not the only form of bodily violence that Intersex people face.” There are other major forced and/or coerced medical interventions such as hormonal treatment and sterilisation. (And not all Intersex people have sex variations that are recognized at birth.)

Hendricks emphasised the need to respect Intersex people’s dignity and autonomy, to prevent (and address) discrimination against Intersex people in all areas of life, and for mechanisms of redress to be available to Intersex persons who have suffered violations. She also added that the antenatal care available to future parents should include the provision of evidence-based information about Intersex.

Intersex activists have repeated that consent is a key principle in upholding the rights of intersex people (and all people). Referencing the conference materials that civil society groups had created, she stated: “The principles of informed consent and self-determination are particularly important for intersex individuals, who continue to be subjected to human rights violations, such as infant gender mutilation, which undermine their Constitutional rights to human dignity, bodily and psychological  integrity, and their right to make their own decisions regarding reproduction.”

The two government representatives did not discuss recommended policy changes in detail. Dr Chidarikire, who specialises in HIV response, reiterated that no one should be left behind, and she affirmed the department’s commitment to making sure that Transgender and Tntersex people’s rights are protected and translated into policy.

Notably, the doctor echoed a suggestion put forth during a morning panel, observing that it might be useful in the South African context: Mauro Cabral Grinspan (founding co-director, GATE) had suggested that it could be useful to develop a way that doctors, who are often afraid for their careers, could confidentially report when they learn that non-consensual non-vital medical interventions are being performed on Intersex people in their hospitals.

Dr Chidarikire also said that South Africa’s upcoming National Strategic Plan should highlight the issues discussed during the conference, and she suggested that the laws that we need to protect transgender and intersex people’s rights already exist.

Mofokeng, who works in the DHA’s policy development unit, stated that the department “will come up with workable and implementable solutions.”

She stated that Act 49 will be amended in order to safeguard personal information. This statement represents a shift from the commitment articulated yesterday by the department to the repeal of Act 49. Mofokeng also referenced the DHA’s commitment, expressed yesterday, to implementing a hybrid model for future South African national IDS ( A hybrid model means a combination of the current system, in which “male” or “female” is indicated by the seventh digit of the national ID number, alongside the projected new option of possessing a gender-neutral ID number).

The upcoming discussions of specific policy recommendations will be crucial.