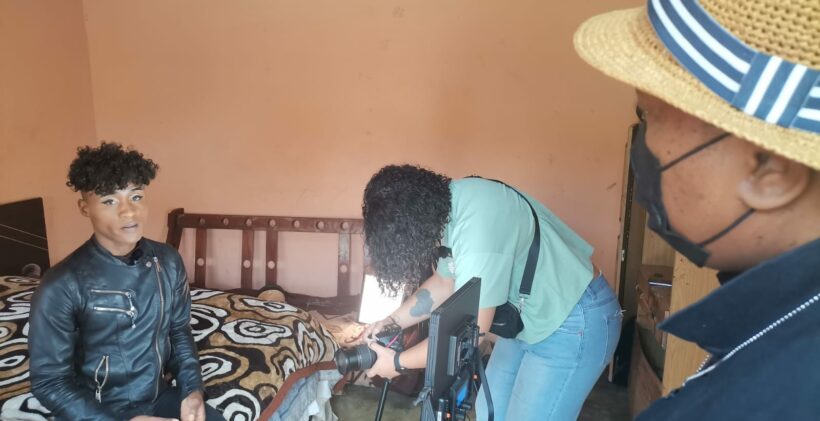 Capturing the stories of the LTI community

Iranti’s documentation team took a road trip to Polokwane at the end of November to speak to members of the Lesbian, Trans & Intersex (LTI) community and document their challenges and the steps they have taken to overcome these.

The trip was part of Iranti’s commitment to documenting the stories of those who face human rights violations, to raise awareness but also to educate and inform people outside the LGBTQIA+ community about what we face and how we fight back.

“Hearing the experiences of these people, what they’ve been through and what they face daily is heartbreaking,” said Intersex Programme Officer at Iranti, Crystal Hendricks.

“Something as simple as access to basic and affirming healthcare can be such a confidence-boosting experience, and yet, for someone who is trans or Intersex, or both, it’s almost impossible. How do we live in a society where this is the case,” she asked.

Mandla, who has been taking part in documentation projects at Iranti over the last eight years, said one’s expectations when documenting these stories never aligned with reality when coming face to face with survivors of human rights violations.

“In the case of Polokwane, of course, I had my expectations, but they were very low because I’ve been through this many times before. You can never be fully prepared for the revelation of these experiences and how they will affect you,” Mandla said.

She said the documentation of LTI people, especially in marginalised communities, is what has set Iranti apart from other organisations.

Mandla said marginalised communities often face more human rights violations than anywhere else because members aren’t educated or informed about what their rights are and how they can report violations.

THE EFFECTS OF SOMEONE ELSE’S TRAUMA

Mandla said the documentation of these lives and stories is necessary for the betterment of the entire LTI community but added that there is a downside.

“Listening to these stories, even from behind the scenes can have a major effect on you as a person because you’re essentially taking on someone else’s trauma”.

Hendricks said, “sometimes hearing someone’s story and taking the time to empathise with them is exhausting. It can stay with you for days on end and enter different parts of your life.”

She said she sometimes cries on the way home from these stories, as a release, because taking them home can feel like too much.

The stories will be shared this year.

Iranti takes the documentation of LTI persons’ stories very seriously and would encourage you to share yours with us.