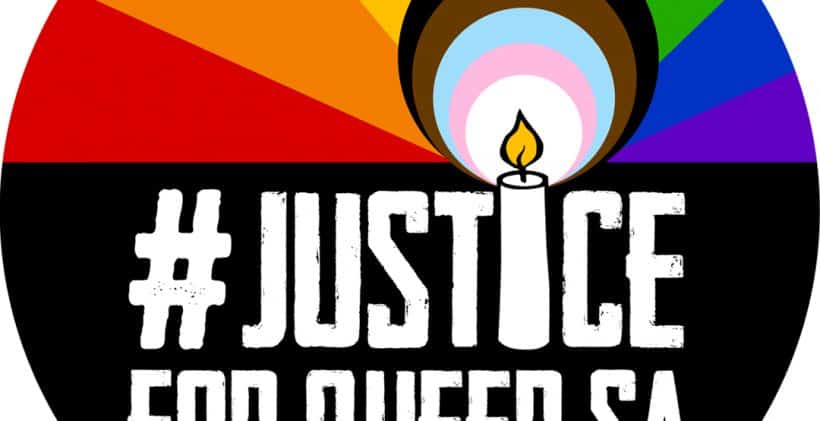 Lives are at stake: LGBTIQ+ sector awaits promised response from Dept of Justice on hate murders

16th May 202118th May 2021 IrantiLeave a Comment on Lives are at stake: LGBTIQ+ sector awaits promised response from Dept of Justice on hate murders

Lives are at stake: LGBTIQ+ sector awaits promised response from Dept of Justice on hate murders

On 5 May, civil society organisations (CSOs) from the Lesbian, Gay, Bisexual, Transgender, Intersex (LGBTIQ+) sector met online with the Minister of Justice and Constitutional Development, Ronald Lamola, and other members of his department.

The meeting was sparked by a recent horrifying spike in murders of LGBTIQ+ people that has seen at least ten known individuals killed since 12 February 2021. It also followed a 21 April press conference, petition and joint statement supported by more than 30 South African CSOs demanding action to address the wave of LGBTIQ+ violence and hate.

In the 5 May meeting, the Minister acknowledged that the National Task Team (NTT), the Rapid Response Team (RTT) and the Provincial Task Teams (PTTs), which are led by the department and are intended to address hate crimes, were dysfunctional.

This is due to various delays, a lack of funding and resources and the failure of some stakeholders, particularly the SAPS, to participate in these fora. Some members of the Justice Department have also failed to meet their commitments and/or respond to communications from the LGBTIQ+ sector.

The Minister revealed that only R2.4 million of the R26 million National Implementing Strategy budget had been allocated towards PTT and NTT activities.

The meeting also addressed the delay in the passage of the desperately-needed Prevention and Combating of Hate Crimes and Hate Speech Bill (Hate Crimes Bill).

The Minister asked that the Department of Justice and Constitutional Development (DOJ & CD) be given 21 days to respond to the questions and concerns of the LGBTIQ+ sector raised in the meeting.

The LGBTIQ+ sector is thus expecting to receive the feedback from the DOJ & CD by 26 May 2021 concerning the below issues, as outlined in the May 5th meeting:

The above concerns and demands were reiterated in a subsequent letter (https://bit.ly/3fBoNYf) sent on 14 May 2021 to the following officials at the DOJ & CD: Minister Ronald Lamola, Deputy Minister John Jefferey and Director-General Advocate Dr Mashabane.

The LGBTIQ+ sector would like to note that its engagement with the DOJ & CD is only one aspect of its efforts to ensure that all South Africans – including religious and traditional leaders and the media – respect, protect and affirm the rights, dignity and safety of the LGBTIQ+ community.

We urge all supporters and allies to sign the online petition demanding action against LGBTIQ+ hate and violence in South Africa: http://chng.it/HLGgF69Wk8