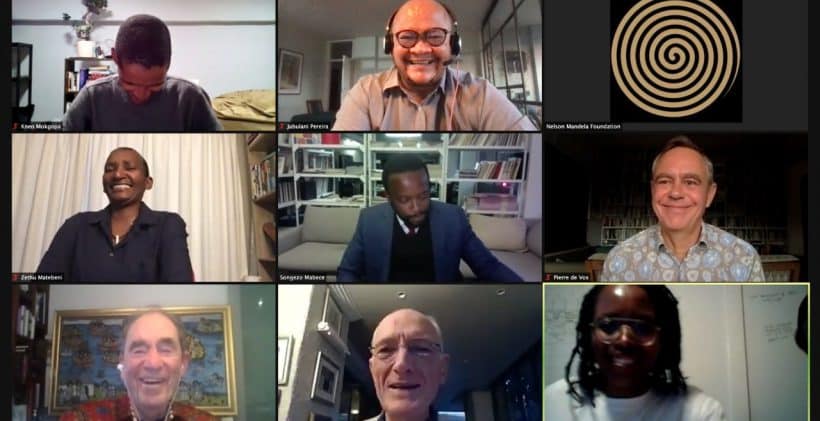 “We still have people gatekeeping our identities”

Has the Constitution fulfilled its promise of dignity for all? This was the question posed at a “We The People Round Table Series” hosted by Constitution Hill and the Nelson Mandela Foundation on 21 May 2021 on Zoom.

The discussion took place twenty-five years after the South African Constitution came into effect with a clause protecting the dignity of sexual minorities – making South Africa the first country in the world to do so.

“I think we need to stop believing that we had a complete victory,” Pereira said during the dialogue facilitated by Songezo Mabece of SAFM. “When homosexuality was removed as a mental disorder in 1990, the United Nations kindly added transgender and intersex as disorders. These classifications still exist. We still have people gatekeeping our identities,” Pereira added.

“Rights are not enjoyed by everyone in exactly the same way,” De Vos concurred with a personal anecdote of him being able to successfully tell the police off – citing his rights in the new South Africa – when found by policemen in yellow vans kissing another man. “The protection of one part of your life without other parts of your life being protected, makes it less possible for you to taste the fruit of this product of freedom. And one cannot divorce all of these things, whether it’s the right to freedom of expression, housing, healthcare & education. And if we are going to engage in struggle, it’s important that we remember that and not do as the coalition did in 1994 when they erased trans people from the story,” said De Vos.

“In marking this history, we also need to mourn this history because this very history presents and renders some people invisible. And one of the communities that we rendered invisible in the struggle for the inclusion of sexual orientation are trans people, who were also an important part of that fight,” Pereira added.

There was an agreeable sense by all panelists that the gains made with the establishment of the constitution mean nothing if they don’t translate from the glorious paper in the Constitution to the lived experiences of all. The panelists recognized the unsung heroes of the movement, from those working on the ground, to those who endure daily violence, the ones who have lost their lives to hate crimes, and the heroes of the movement such as Simon Nkoli who fought for the inclusion of sexual minorities in our constitution.

“When they rejected him as a homosexual man, he challenged [his fellow trialists and comrades] and forced them to accept him. That’s an extraordinary act of sustained activist courage,” said Justice Edwin Cameron on Nkoli coming out during the Delmas Treason Trial. Cameron also recognized the dykes and queers of Cape Town, and the receptive spirit of the ANC, that played a role in shaping the Constitution which protects the dignity of queer people.

Through individual queer people coming out, like Nkoli did, we are able to find each other as a community, to connect, to mobilize and organise together in making sure that our rights are realised from paper to reality.

“We have to claim our own entitlement to queerness. Come out to your best friend, your closest circle [of friends], you don’t have to come out in the Sunday newspapers or on a platform. But claim your identity, that is the start of insight and consciousness, and it leads to an acceptance in a greater political structured organizational sense,” Cameron added.

This is a moment for us to really reflect on whether we have given up the fight because all gay people can now adopt and get married, and that trans people and intersex people are on their own,” Pereira who also emphasized how no one can be free unless everyone is free.

The panelists felt there was still a lot more to be done not only in helping advance the rights of trans people in South Africa, but also in ensuring the protection of the dignity of all queer people outside the South African borders.

“You need the people most affected to speak out. You need combined action. You need allies. said Judge Albie Sachs who emphasized the need for grassroots level organising, citing the Treatment Action Campaign as one prime example.

On the question of the most affected people speaking, he echoed the words of Nelson Mandela when he said that “there can be no keener revelation of a society’s soul than the way in which it treats its children”.

“We don’t talk about the violence from birth that forces you into a cis binary of being a girl or a boy,” said Pereira. When children are born, they are immediately boxed into limited ideas of gender normativity.

The solution,  says Sachs, is to “take pride in our differences and unite in our diversity”.

Constitutional Hill and LGBTQIA+ civil society organisations have organised a vigil under the banner #JusticeForQueerSA in memory of those whose lives have been lost to hate crimes. The vigil will take place on 26 May 2021 between 5pm and 7pm at Constitutional Hill.