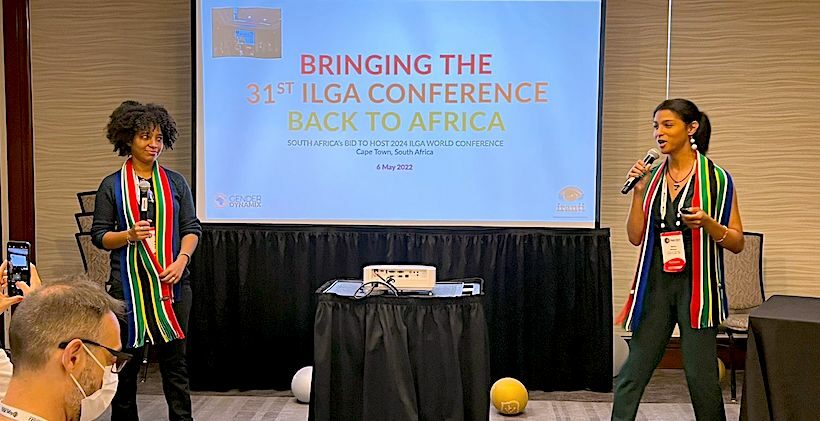 As we commemorate International Day Against Biphobia, Intersexphobia and Transphobia, Iranti and Gender Dynamix (GDX) are heartened to receive Minister of Justice and Constitutional Development, Mr. Ronald Lamola’s support and endorsement of our successful bid to host the International Lesbian, Gay, Bisexual, Trans, and Intersex Association (ILGA) World Conference to be held in Cape Town in 2024.

South Africa was announced as the official host for ILGA World 2024 after a joint team from Iranti and Gender Dynamix presented a compelling bid at ILGA’s 30th world conference, in Long Beach California.

“We are very excited to bring the world to African shores as we advance human rights for LGBTIQ people at a difficult time where we see many attempts at rolling back progress. We are grateful to the funding partners and members who endorsed our bid. As co-hosts, we know we are not walking alone and that we can count on our partners, government, academia and most importantly community to take this journey with us” said Gender Dynamix Executive Director, Liberty Matthyse.

“Hosting ILGA World 2024 is a huge moment not just for South Africa, but for the continent and for the LGBTIQ community in Africa. This is a stepping stone towards visibilising our community and creating greater advocacy opportunities and strategic engagement spaces across the LGBTIQ movement in all of Africa. We as Iranti and GDX are so thankful to our partners who mobilised support that was crucial to the success of our bid” said Iranti’s Acting Co – Director, Jade Jacobs.

“We are incredibly proud of our joint bidding team for bringing this home. We are beyond excited to be bringing ILGA World back to the African continent for the first time in over two decades. This continent has a strong and vibrant LGBTIQ movement which continues to make significant strides despite repressive and often violent homophobic contexts, and it truly is time for the LGBTIQ movement to be led from the Global South” added Iranti’s Acting Co-Director, Nolwazi Tusini.

An ILGA World Conference is a chance to assess where LGBTIQ communities stand, share experiences and best practices, build alliances and partnerships, discuss the future of our movement, and collectively chart ways to advance equality worldwide. Africa has a valuable contribution to make towards this mission.

South Africa was one of the first countries in the world to provide explicit and full constitutional protections to LGBTIQ persons, and therefore has a favourable legal and political context to host a global LGBTIQ conference of this nature.

However as has been noted by Minister Lamola today, our country still has much work to do in the protection and promotion of the rights of LGBTIQ persons because discrimination, prejudice, and violence on the basis of a person’s sex, sexual orientation, gender identity, gender expression and sex characteristics still exists.

“With help from civil society organisations such as Gender Dynamix and IRANTI we are constructing a truly inclusive society – one which not only accepts, but celebrates diversity, where people can be themselves no matter what their sex, sexual orientation, gender identity, gender expression, sex characteristics may be and where everyone has the same enjoyment of their human rights” said Minister Lamola.

We look forward to continuing to do the work to build a truly inclusive society that is safe for LGBTIQ persons, in partnership with Minister Lamola, the Department of Justice and Constitutional Development as well as the government as a whole.

We hope that we will get the opportunity to engage the Minister on Legal Gender Recognition in particular. In South Africa, no express law exists for transgender and non-binary people to amend their gender markers on their identification documents, except for Act 49. Act 49 allows transgender persons, who have begun their medical transition, (hormonal or surgically) and intersex persons to change the sex descriptor on their identity documents, to reflect their gender identity. This law is currently being challenged by trans and intersex movements, who have applied for amendments with the Department of Home Affairs (DHA).