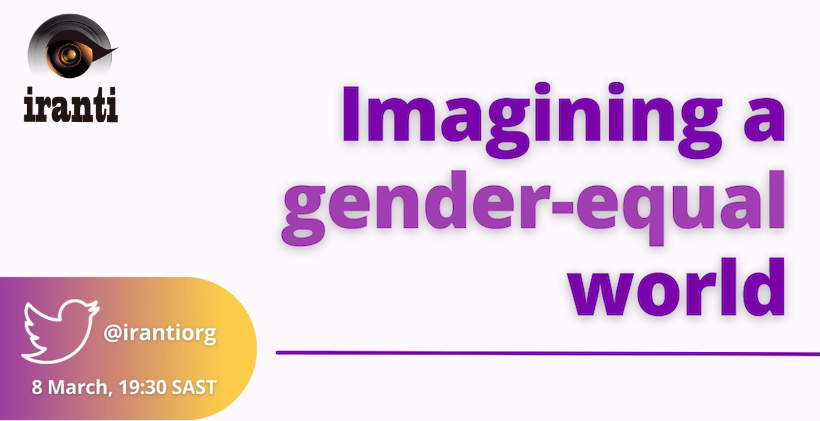 If we were to imagine a gender-equal world, what would it look like?

For speakers on the Iranti International Women’s Day Twitter Space held on March 8, it would be a world where womanhood is inclusive and diverse. Lesbians, Gays and Bisexuals of Botswana Acting Education, Awareness and Communications Manager Matlhogonolo Samsam said she imagines a world where diversity is as “normal as breathing”.

“When I think of an equal world, I think of equal opportunities and equal resources for everyone” Samsam said.

The Iranti Twitter Space was titled “Imagining A Gender-equal World” and gave LGBTQI+ women a space to reimagine themselves and share the complexities of existing in a world that does not always affirm their existence.

Moderating the discussion, Iranti Communications and Media Manager said queer people – as oppressed people – have had to reimagine themselves.

“When people have to exist in a space that says that they are less than human, they have to do a lot of work of imagining themselves into being” Tusini said.

“Women form the majority of the world’s poorest people and the number of women living in rural poverty has increased by 50% since 1975” says a UN Human Rights article.

For women part of the LGBTQI+ community, discrimination is further compounded, with the UN highlighting LGBTQI+ persons generally face intersecting biases and prejudices.

“The intersection with racial discrimination, on the grounds of race, colour, descent, national or ethnic origin, makes LGBTQI+ people even more vulnerable to discrimination and hate-motivated violence” the article says.

As a transgender woman in South Africa, Iranti Media and Communications Specialist, Zoey Black, said she has seen how the definition of womanhood is narrowed to fit in a specific type of woman that is cishet.

“From the get-go, the concept isn’t necessarily inclusive from its inception, and I think that is a fundamental problem that we need to shift” Black said.

While patriarchy is often pointed to as a key driver of gender exclusion, Iranti Intersex Programme Officer Crystal Hedricks said women are often harmful towards each other.

“As women in South Africa and also in Africa as a region, I think we need to get to the point where we realise that genitalia does not make up someone’s gender.  If I say I am a woman, I am a woman” Hedricks said.

Tsitsi Ndabambi, Intersex Community Trust Zimbabwe Executive Director said there is a “rat race” among women where there is constant competition.

“We also need to find a way to stop it and to accept each other as women, and just appreciate and enjoy our womanhood” Ndabambi said.